Global MHD Simulations of the Magnetosphere 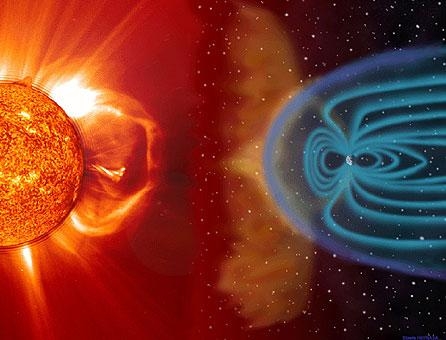 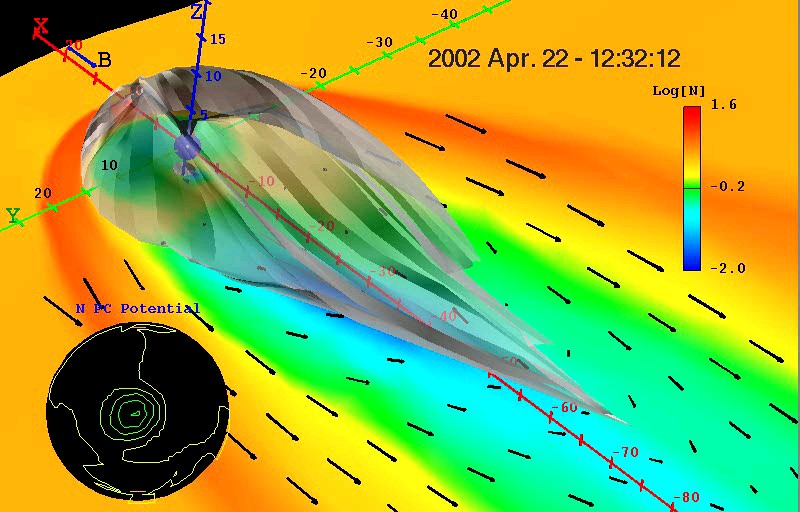 Numerical modeling is crucial to the understanding of space plasmas, and a range of different simulation codes are needed to model different phenomena. The dynamics of the magnetosphere in full three dimensions is carried out using a magnetohydrodynamic (MHD) model, a state of the art global scale code that utilizes the computing power of modern supercomputers. This code can simulate the magnetospheric conditions from spacecraft measurements and thus provide a comprehensive picture of the response to the solar wind variations. Such codes are the natural choice as the backbone of a Geospace General Circulation Model for forecasting space weather. Other codes include hybrid particle codes which incorporate both the particle and fluid aspects of plasmas and are used to model shocks and discontinuities in nature. This approach has elucidated the basic nature of collisionless shocks, and are important for understanding thin plasma boundaries such as the magnetopause.

Nonlinear Dynamics and Complexity of the Magnetosphere 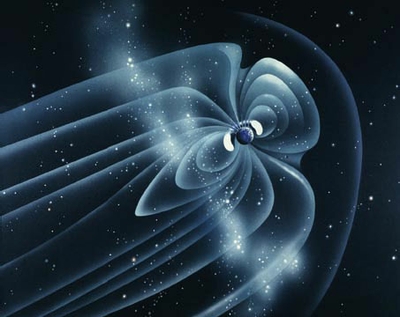 Many physical systems in nature or laboratory exhibit complex behavior, and this often arises from the nonlinear and dissipative properties of such systems. A nonlinear dissipative system is often described in terms of a few variables, and the complexity arises from the sensitivity to initial conditions. Analysis of the observational time series data of the magnetosphere using the techniques of nonlinear dynamical systems has shown that its dynamics has a component that is low dimensional, and thus its behavior can be predicted. This is the first large scale natural system which exhibits low dimensional behavior. For specified solar wind conditions these techniques can predict the occurrence and intensity of magnetic storms and substorms, and can be used as a forecasting tool for space weather. Along with the global and low dimensional features the magnetosphere also exhibits multi-scale features characterized by a power law of the scales present. The presence of the global and multi-scale properties can be reconciled in a comprehensive model based on phase transition physics. The global or low dimensional behavior corresponds to the well known first order phase transitions and the multi-scale behavior to the scale invariance properties at second order phase transitions.

Magnetic reconnection is ubiquitous in nature and the understanding of its onset in collisionless plasmas has been one of the key problems of space plasma physics. The reconnection process takes place in thin current sheets and the understanding of the inter relationship of these processes is crucial to reconnection studies. The tearing instability has been considered the key instability that initiates reconnection and its theory is complicated due the complex magnetic geometry of the thin current sheets and the kinetic nature of the processes. Using a novel approach that takes into account these complicated but essential issues the tearing mode eigenmode has been analyzed and the conditions for the instability elucidated. The key role is played by a population of electrons that is not trapped in the current sheet, thus enabling it to short the electric field that stabilizes the mode. This explains in particular the spontaneous reconnection in the tail of Earth's magnetosphere during substorms and is important in understanding reconnection in other settings.

The interaction of powerful radio emissions with the ionosphere leads to numerous physical processes. A numerical model is used to study the spatial and temporal irregularities of electron density and temperature due to the HF-heating of the ionosphere. The heating also generates low frequency waves (ELF) when the radio waves are modulated. Helicon waves excited in the process produce current closure and determine the properties of current loop which generates the ELF emission. The model results agree with the first observations of the ELF emission generated by the modulated ionospheric radio wave heating using the HAARP facility. In the study of solar wind-magnetosphere coupling, the global MHD simulations have been used to obtain the field aligned currents in the ionosphere and the consequent heating due to instabilities. This explains the ground based riometer observations during substorms.

High altitude optical flashes or lightning is one of the oldest natural phenomena, having been observed by human eye more than 100 years ago. Current interest in this curious phenomena stems from the recent comprehensive ground based and airborne observations using high sensitivity cameras. These flashes, grouped as "red sprites" and "blue jets", appear as short-lived diffuse light streams, and unlike normal lightning, occur above the thunderclouds. The sprites, which extend up to 90 km high, have an average lifetime of a few milliseconds, whereas the jets appear to squirt upward from the tops of thunderstorms, reaching heights of 35 km. In the first model of red sprites, developed by this group, the electromagnetic pulses in the upper atmosphere induced by low altitude lightning produce highly energetic electrons. These electrons then form a seed population that can lead to a lightning discharge, and can also explain the gamma ray flashes associated with high altitude lightning.